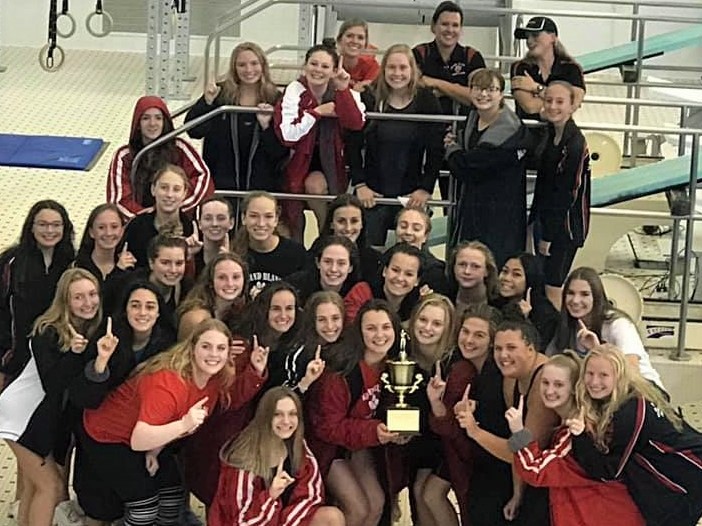 It was a highly competitive meet between Grand Blanc and Fenton with both teams wanting to take home the champion title. They are the only two teams to have won the trophy. The Tigers regained the title last year after Grand Blanc had an 11 year winning streak. This year GB was going to fight hard to get it back, but Fenton was going to fight just as hard to keep it.

The divers started off the meet with their prelims competition Thursday night performing their first 8 of 11 dives. Out of a field of 19, the GB divers were able to place themselves in 4th, 5th, 6th, and 10th heading into Saturday’s finals.

Swimming prelims took place Friday afternoon and the Bobcat swimmers were ready to build on what the divers started. Grand Blanc was by far the biggest team in attendance and capitalized on their numbers. A total of 25 swimmers qualified for finals to give the Bobcats 44 races in addition to the 4 divers on Saturday.

Finals began with the 200 Medley Relay. The Bobcats and the Tigers were in adjacent lanes. Throughout the race the teams were neck-and-neck with each relay leg giving it their all. The anchor freestylers were in unison as they approached the end wall. Only 5 one hundredths of a second separated the two relays, both breaking the meet and pool records and qualifying for their state championships. It was the GB relay team of Sophie Curtis, Sarah Hartwell, Allyson Quitos, and Megan Sieloff that posted the faster time and set the tone for the Bobcats for the rest of the day.

Detailed results can be found at https://www.swimcloud.com/results/166661/