The Freshman Bobcat girls traveled to Walled Lake Western this afternoon and came away with a 54-14 victory. The Bobcats were led by Ariana James with 19 points and Amira Collins-Pollard who had 14 points.  They are now 8-4 on the season and 6-0 on conference play.  GB will host Lapeer on Friday at 4pm. 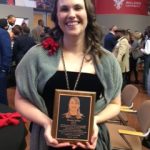 Elizabeth Milian, Softball Elizabeth Milian dominated in the circle for the softball team from 2007-10 and led the Cardinals to their second ever appearance in an NCAA Regional. Her 85 wins and 762 strikeouts are both program records. She tossed 932 innings in her career, which still ranks second in the Mid-American Conference annals. In

The Freshman Bobcat girls won a hard fought 47-32 victory over a tough Fowlerville team tonight.  Ariana James led the way with 14 points while Amira Collins-Pollard tossed in 11 as well. The Bobcats improved to 7-4 overall and 6-0 in Saginaw Valley League play. GB will travel to Walled Lake Western on Tuesday for

The Freshman Bobcat girls dropped a 56-31 decision to Fenton tonight at home. The game was close until the 4th quarter when Fenton was able to use their depth to pull away, outscoring GB 23-6 in the final frame.  Ariana James led the Bobcats with 15 points. Grand Blanc now sits at 6-4 and 6-0