The Freshman Girls Bobcats lost a tough defensive battle 20-16 at Hartland tonight. Ariana James lead the way with 12 points. The Bobcats head into the holiday break at 3-3 on the season and will resume play on Monday, January 6th when they take on Bay City Western at home.

The freshman Bobcats girls dropped their record to 3-2 tonight with a 51-28 loss at Fenton. Despite being tied at 22 at half time, Fenton was able to pull away in the second half as the Bobcats found themselves in foul trouble with two starters fouling out early in the second half. GB was led

The Freshmen Girls improved to 3-1 on the season by beating Lapeer 41-16 last night in Lapeer.  The Bobcats had another strong defensive performance and were led on the offensive end by Amira Collins-Pollard with 16 points.  Ariana James tossed in 13 points for her 4th consecutive game in double figures. GB looks to extend 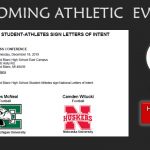