Elizabeth Milian, Softball
Elizabeth Milian dominated in the circle for the softball team from 2007-10 and led the Cardinals to their second ever appearance in an NCAA Regional. Her 85 wins and 762 strikeouts are both program records. She tossed 932 innings in her career, which still ranks second in the Mid-American Conference annals. In the 2010 MAC Tournament, the righty pitched all 28 innings for the Cardinals and went 4-0 with a 0.25 ERA and 40 strikeouts to earn tournament MVP accolades. The two-time all-conference and all-region pitcher also earned 2010 CoSIDA Academic All-America third team honors. 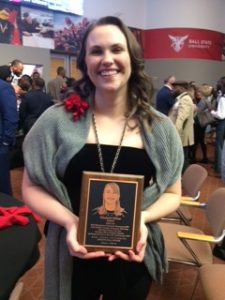