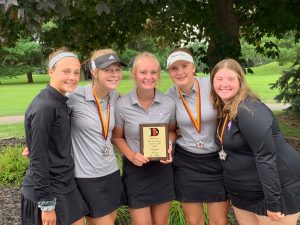 On Monday the Girl’s Golf Team finished first at the Davison Invitational!!

The Lady Bodcats team posted a score of 321 which was one of the lowest team scores in the 40 plus years the invitational has been played and finished in first place over Rochester Adams and Powers Catholic.

Kate Brody shot a 73 in regulation play which had her tied for medallist along with two other girls.  Brody lost on the first playoff hole settling for a par after finding  trouble off the tee.

The Bobcats had great support from Junior Madison Brigance coming in with an 80,  Sophmore Taylor Kondel at 82, Junior Halee Frame 86 and Senior Allison Morgan 111.