Grand Blanc Varsity Softball traveled North to take on OHHS, Alpena, Garden City, and Alpena in a whirlwind two days.  Although there wasn’t any rain, it sure was cold.

Friday nights double ended with a split.  Kendall Klochack took the mound with Olivia Bainbridge behind the plate.  Kendall Klochack threw another no hitter 7-0.  She went seven innings, allowing zero hits, zero runs, zero walks, and striking out 20.  GB was hitting the ball well racking up 12 hits in the game.  Brie Broderick go it started with a fielder’s choice, scoring one run.  Klochack, Mady Roover, and Rebecca Oetting each racked up multiple hits.  Klochack went 3 for 4 at the plate.  GB Varsity didn’t commit a single error in this game.

Our bats were on fire game one, but game two, they were snuffed out.  We just struggled to find our groove.  Megan Martin took the loss with Jaz Carroll behind the plate.  She allowed six hits, five runs, striking out two in four innings.  Kendall Klochack went 2 for 3 at the plate leading in hits.  We lost 0-7.

Saturday morning started off bright against Alpena.  We entered the tournament knowing we would see great competitors all day and we were ready to battle.  We started off with Alpena.  Kendall Klochack threw a shutout to lead us past Alpena 2-0.  She went seven innings, allowing zero runs on four hits, walking zero, and striking out 12.  LaNya Bates, Olivia Bainbridge, Rebecca Oetting, Katie Ragsdale, and Klochack each managed one hit to lead GB.  Grand Blanc did not commit a single error on the field.

Unfortunately we lost all energy and focus when it came to Garden City.  Our effort and bats were not in sync the whole game.  Megan Martin took the loss for Grand Blanc.  She allowed five hits and four runs over four innings, striking out one, and walking one.  LaNya Bates, Ally Whitt, Rebecca Oetting, Abby Whitt, and Kendall Klochack each collected one hit.  Martin made a diving catch from the mound catching a low line drive, making this our highlight play of the day.  We lost 1-12.

Grand Blanc was ready to rally against the current number one team in the state, Clarkston.  Our leaders LaNya Bates and Ally Whitt brought the team focus back and prepped the girls for our last battle of the day.  We kept the score close in the first few innings before Clarkston pulled away for the 16-1 win.  Kendall Klochack took the loss surrendering eight runs on 11 hits over five and two-thirds innings striking out eight and walking zero.  LaNya Bates led GB with two hits in four at bats. 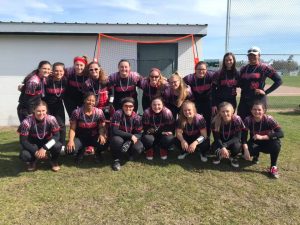 Last night was a highlight for our players, Teacher Appreciation Game against Heritage.  We celebrated 16 teachers that made a difference for our players. Each player wrote a paragraph that was read to the fans about their teacher and hand delivered a rose.  We also gave a great show last night with several diving catches and out of the park homeruns.

Game one was Kendall Klochack at the mound with Olivia Bainbridge behind the plate.  Kendall went four innings, allowing one hit, zero runs, and striking out nine, and walking one for another shutout win 11-0.  Hope Phillips threw one inning making a huge tag out play at home with Bainbridge.  Mady Roover, Bainbridge, LaNya Bates, and Gracie Murray all had multiple hits for Grand Blanc.  Murray had her first at bats for the season and definitely did not disappoint.  She started was our game changer to start our hitting rally.

Game two had Megan Martin on the mound with Jaz Carroll behind the plate.  Megan pitched a shutout 10-0 victory.  She went five innings, allowing zero runs on two hits, striking out five, and walking one.  Three home runs were hit by GB.  Annabelle Morningstar went yard out of left field in the second inning, LaNya Bates went deep in the third inning making it a homerun, and McKenzie Simpson drove one out in the fourth inning.  We racked up ten hits with Klochack, Morningstar, and Simpson all having multiple hits.  Grand Blanc didn’t commit a single error in the field.  Morningstar and Simpson led putouts for our defense.

We are now 16-8 overall.  Wednesday we have a conference game against Powers away and we will be at the Kearsley tournament Saturday afternoon.